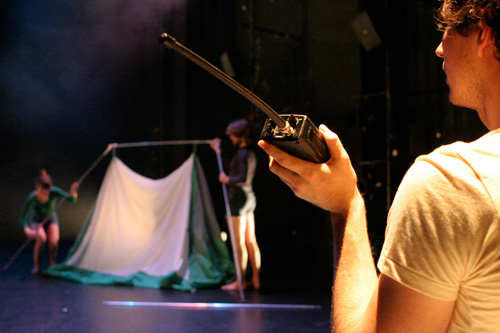 An absurd, playful and humorous performance, Sonya and Layla Go Camping is built around a narrative that folds back in on itself over the course it’s duration, creating a sort of structural feedback loop over three distinct acts. The title of the performance references Jacques Rivette’s 1974 film Celine and Julie Go Boating, a film in which the two titular protagonists are engaged in a similar looping narrative, a mobius strip of a story that moves from action to inaction, function to dysfunction. This structural basis is seen in the movement and overall narrative of the work, but it is also embodied through language in the script of the performance. The characters speak about the creative process, the details of which always remain elusive and unsaid. When this is heard during the first act, in the dark over a pair of walkie-talkies, it is as if the dialogue is outlining the actions that will play out in the ensuing performance. Childs asks, “How we gonna end this dance?” to which the reply “Have you guys ever thought of maybe taking this piece to France?” launches the second act, a French-language rendition of the dialogue from act one, shot in Paris with an ongoing visual re-enactment of key scenes from the Rivette film. In Sonya and Layla Go Camping everything is a mirror, a shadow, a reference and a riff: the naked man with Mickey Mouse gloves who emerges on the stage in act one haunts and follows Sonya and Layla in the video of act two; the form of his white gloves is echoed in the hand-shaped chair on the set in act three. The making of the performance is constantly in flux, the lines between performers, writers and viewers continuously being blurred. 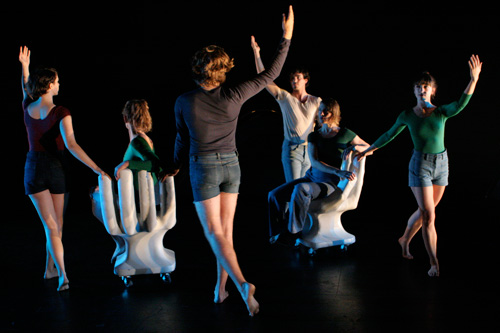