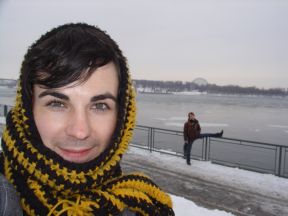 I’m teetering across the stage in five-inch stilettos with a video camera strapped three feet in front of my face, a giant plushy rabbit head velcroed to a helmet – strapped on top of my head, running in the dark, holding a flash light in my face, cascading through a set of screens, projectors and extension cords, while screaming my fucking head off, as a high-glam blond-bunny in Big Art Group’s multimedia spectacle ‘SOS’. It’s in moments like these when I remember that PERFORMANCE IS DANGEROUS. And I wouldn’t have it any other way!

Beyond the obvious physical risks of performing ‘SOS’ there lies an even more dangerous world of ideas. From beneath the bunny suit emerges a secret agent from the Realness Liberation Front – a group of post apocalyptic transsexual revolutionaries bent on dismantling meaning in order to usher in the beginning of the new nothing. The work is like a beautiful ball of cotton candy encasing a secret layer of shattered glass – a visually mesmerizing surface that chips away to reveal a subversive battlefield of gender-fuck anti-capitalistic annihilation. It is this power, this potential for revelatory spells and change, which makes performance dangerous. It’s my way of making a difference in this world.

The gift of participating in performance work is also a tremendous responsibility. Currently, my artistic practice faces the biggest challenge of my career as I prepare to perform Marina Abramović’s ‘Imponderabilia’ for three months this spring at the Museum of Modern Art. In this seminal work a man and woman stand opposite each other naked in a doorway, so that the audience has to choose which one of us to face to pass through and enter the exhibition. With nothing to do or hide behind, and without the safety of the theatrical context, my challenge is to be 100% present in the face of extreme vulnerability and uncertainty, like I’ve never faced before. This situation could prove to ACTUALLY be dangerous.

And then there’s the work of Faye Driscoll, which unites the most rigorous physical tasks within the most awkward social situations. Hailed as one of the top five dance pieces of 2008 by the New York Times, last year’s ‘837 Venice Boulevard’ was a crash course in stage combat and facing my personal demons. Intensely manipulative partnering gives way to incisive verbal thrashings, digging into the roots of identity formation and how we each blame the world for our problems. Currently, we are exploring the movement between extreme states of hatred and love – from being tortured to being baptized, from wrestling to fucking, from ecstasy to violence…this is the world I’m living in NOW, it premieres this spring at Dance Theater Workshop.